Joyce Stokes Jones was born on December 31, 1929 in Auburn, New York, the home and death place of Harriet Ross Tubman. Jones attended Seward Elementary School and was graduated from West High School in 1948. Jones was a career secretary and retired in 1989 after fifteen years as Secretary to the President of the Syracuse Common Council. Beginning in the early 1970’s, Jones began 30 years of research and writing about the life and times of her Great Grand Aunt Harriet Ross Tubman.

In 1968, Jones contracted with the Syracuse Herald Journal to write a weekly column called “Black Heritage” which depicted notable African American figures in American history. During that same year, she worked at Channel 9 where she produced a children’s segment on Black heritage. Later in 1970, Jones was commissioned by New Readers Press to write a column entitled “Blacks in Time”. A few years later in 1972, she was hired at WCNY/Channel 24 to produce and direct thirty minute segments dealing with issues in the Black community.

For the past thirty years, Joyce Jones has made numerous presentations to students, and congregation and community forums on Harriet Tubman’s life. She has also conducted tours at the Tubman Home. Her travels have taken her to such places as Annapolis, Cambridge and Bucktown, Maryland. She has also visited St. Catharines, Canada; Cleveland, Ohio; New York City; Washington, D.C. Philadelphia, Pennsylvania; and Auburn, New York. Jones made these trips in search for relevant information which often led to new and different discoveries on her famous relative.

In 1985, Jones produced a documentary video on Harriet Tubman’s life based on findings called “A Conversation with a Living Relative of Harriet Tubman”. Later in February 1992, she designed and handcrafted the Harriet Tubman Doll. The doll was modeled after the author’s late daughter, Olivia Babette Jones, who resembled the famous conductor of the Underground Railroad. The Harriet Tubman Doll was a limited edition series.

In October 1999, Jones was motivated to compile her research and writings to author Beyond the Underground. Aunt Harriet, Moses of Her People. It chronicles her investigation into circumstances and significant events that shaped the lives of the Green Ross, Stewart, Elliott, Gaskin and Stokes family line, while focusing on Harriet Ross Tubman, one of America’s greatest and bravest heroines. It is a poignant story that describes, in detail, the nuances and realities of slavery on the Eastern Shore of Maryland, and alludes to the paradox of winning freedom in the northern states and Canada. The backbone of this work explores the relationships between family members, their masters, and friends, all of whom helped to create the Harriet Tubman saga. The manuscript is more dynamic and humbling than is often documented. 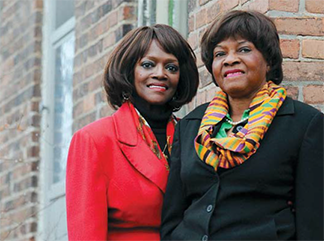 In 1999, Joyce Stokes Jones and, her daughter, Michele Jones Galvin began collaborating on an epic documentary. Told from a family perspective, Beyond the Underground. Aunt Harriet, Moses of Her People portrays the life, times […]

Your cart is empty.